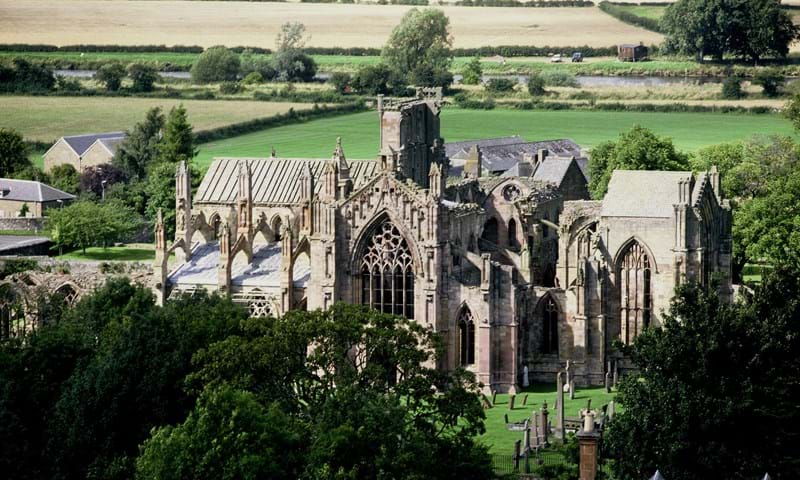 Melrose is an area steeped in history that’s been inhabited for thousands of years, and it’s there in the Tweed Valley where you’ll find Melrose Abbey, one of the most famous ruins in Scotland.

The abbey has been around for almost a thousand years and due to its location in the Scottish borders. It was on the front line of battles between the two nations throughout the Middle Ages, which is part of the reason why so much of the building lies in ruin today. Even so, there’s a lot of the original structure left intact and there’s certainly enough to give you a good insight into how impressive it would have looked in its heyday. The presbytery at the east end is surprisingly well-preserved and the exterior is lavishly covered in stone carvings that (to my mind at least) easily rival the stunning Rosslyn Chapel in Midlothian.

Take a good look at the abbey walls and you’ll see hobgoblins, demons, angels, and even a pig playing the bagpipes. It’s a fascinating place. The abbey is also famous for being the final resting place of the heart of the 14th-century Scots king Robert the Bruce (his body is buried in Dunfermline Abbey), and there’s a commemorative marker that depicts the burial site. It’s a genuinely interesting piece of Scotland’s history and if you want to learn more about the story of Melrose Abbey there’s a museum in the old abbot’s house that displays an impressive collection of medieval objects from the original cloister.

The entire complex must have been an awesome sight back when King Robert was alive and to be honest, I can’t really blame him for wanting his heart to be buried there.

Things to do at Melrose Abbey

The visit to the Melrose Abbey is particularly enjoyable if you’ve got even the tiniest bit of interest in the history of Scotland. The gorgeous setting of the abbey is worth the entrance price alone, with the triple peaks of the Eildon Hills rising in the near distance which offers a good walk in the middle of the Borders countryside.
There’s a serene atmosphere at this abbey and it’s all too easy to imagine the medieval Cistercian monks going about their business as you walk around the perimeter of the ruined buildings, but to see the ornate stone carvings you’ll have to get close to the ruins of the nave and transepts.

The remains of this part of the abbey are pretty big so thankfully an audio guide provided by Historic Environment Scotland (HES) will tell you where to look and what the history behind each feature is, but if you’d rather just explore it for yourself there are members of staff on-hand to point you in the right direction if you’re unsure of what you’re looking at. Leaving the abbey you can head to the Commendator’s House which is where the museum exhibits are displayed, and it’s there where you’ll find all the artefacts that have been unearthed from the site over the years. While it’s not a particularly big museum it’s a nice addition to the site and there are a few surprises waiting for you in the display cabinets -- like the pair of spectacles that have somehow miraculously survived in remarkably good condition.

As is usual with HES sites the facilities are pretty good with a small gift shop, toilets, and a picnic area, and If you’ve got kids in tow you can keep them occupied with the HES supplied fact-finding quiz and word-search. They’ve also done a good job of installing level surfaces and although some of the paths are cobbled they should be easily accessible for anyone in a wheelchair. If you’re a photographer you’ll have ample photo opportunities to get some fantastic elevated shots from one of the towers, and the fact the abbey is in the middle of such spectacular scenery means it can be easily combined with a stroll into Melrose and the surrounding countryside.

The history of Melrose Abbey

The abbey was founded by David I in 1136 in a show of power to prove his ownership of the long fought-over Scottish Borders, and as it was located in an area that had associations with both St. Aiden and St. Cuthbert it made sense that it should be used by Cistercian monks. The abbey served as a base for the monks for nearly 500 years and in that time a great deal of wealth was endowed on it from a succession of wealthy abbots, some of whom had connections to Scotland’s royal family like Waltheof of Melrose who was the stepson of King David.

As the abbey’s wealth and influence grew it eventually became the premier abbey in Scotland -- although that didn’t stop it from being attacked by English forces. Two particularly damaging attacks occurred in 1322 and 1385 when the armies of Edward II and Richard II of England destroyed large parts of the buildings -- with the latter attack taking over 100 years to fully repair. It was attacked again in 1544 by the English as they attempted to force Mary Queen of Scots to marry Henry VIII, but this time it was never fully repaired. Eventually, the ruined walls and roof lead to a decline in the abbey’s use as a working monastery and in 1590 the last monk at Melrose died. In subsequent years the abbey church was converted into a parish church for the expanding town of Melrose and was partially restored thanks to financial assistance from the Duke of Buccleuch, until it was finally handed over to state care in 1918.

What I liked about this attraction