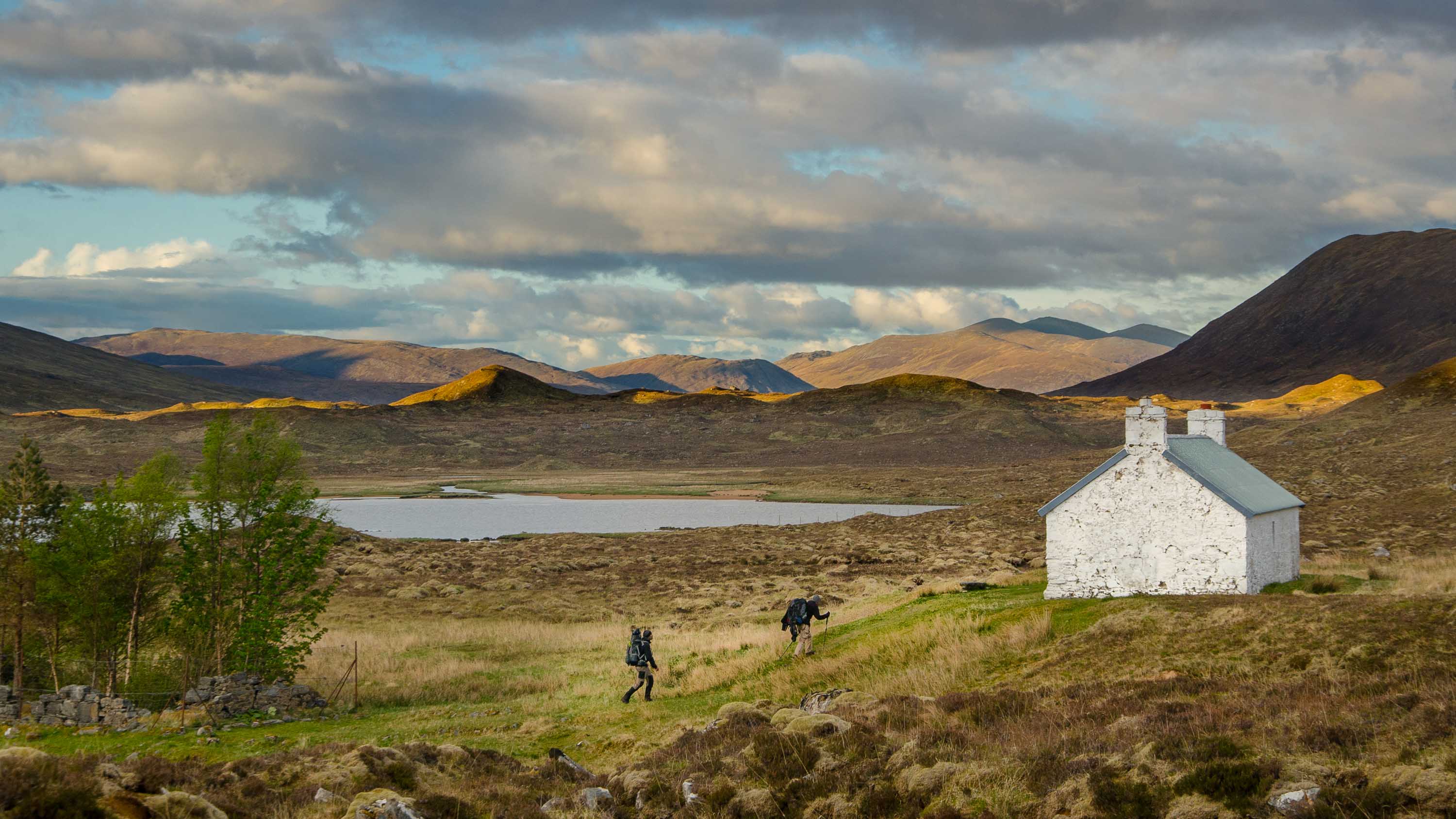 The Cape Wrath Trail is a long-distance walk from Fort William to the most north-western point of mainland Britain, Cape Wrath. The route is unmarked and there is no official line. It is the perfect adventure when saying at our deluxe holiday house in Durness. It is a superb route for very experienced long-distance backpackers, passing through magnificent wild landscapes for most of the route, with the freedom to choose your own exact route; we cover both the common variations starting via Glenfinnan and via the Great Glen.

Welcome to our guide to the Cape Wrath Trail; we have a detailed description and Ordnance Survey mapping covering every stage of the route, accessed via clicking on the stages below. You can also check out the excellent trip reports below for further photos and personal experiences from the trail.

There is no officially-sanctioned route for the Trail and one its joys is that every walker can plan the exact route for him or her self. We give two routes for the first part of the trail. The original idea for the trail was by David Paterson who published a photographic book in 1996; since then there have been a number of different routes suggested by a variety of authors and other walkers.

This route begins by using the passenger ferry to cross Loch Linnhe from Fort William, with the first walking leading perversely southwards before heading up the Cona Glen. A pass leads down to the dramatic monument at Glenfinnan. From here the route heads through the fringes of the Rough Bounds of Knoydart, giving some of the most rugged and challenging going on the whole trail. There are a good number of bothies available on the route, which continues to Barrisdale Bay and then to Kinloch Hhuorn. A final climb beneath the Saddle leads to Morvich in Kintail.

A gentler start is provided by following the Great Glen Way from Fort William. This is then left for the hike up Glen Garry, followed with a couple of passes leading via lovely Glen Loyne to the Cluanie Inn. A dramatic walk down Gleann Lichd then meets the Glenfinnan variant at Morvich in Kintail.

From Morvich the route climbs past the spectacular Falls of Glomach before beginning a lonely crossing of Monar. After crossing Strath Carron, it follows an old pass at the fringes of dramatic Torridon to reach Kinlochewe. A crossing of the Letterewe Forest - evocatively dubbed the Great Wilderness - leads to Shenavall and then Loch Broom. The route then crosses north of the Seana Bhraigh massif to reach Glen Oykel, and the edge of Assynt. The route traverses round above dramatic sea lochs before crossing the moors in the shadow of the great isolated peaks of Sutherland. A final stretch takes to the coastline, visiting the incomparable Sandwood Bay before the final push to the lighthouse at the Cape.

Up for a challenge?

The Cape Wrath Trail is a completely unmarked route, and it runs through very wild and rugged terrain for much of the distance. The walking bears little resemblance to prepared, way-marked trails such as the West Highland Way. Most of those walking it carry a tent, although it may be possible to complete the route staying in a mix of bothies, bed and breakfasts and hotels with careful advance planning. Even then, a sleeping bag, mat, stove and food supplies would need to be carried for the bothy stays.

Although some sections follow paths and tracks, there are also many parts of the route which are pathless; walkers attempting the trail should have a high degree of navigational skill, and always carry a map and compass. There are also several unbridged river crossings which can become dangerous or even impossible in spate conditions. Altogether the route is usually regarded as the greatest backpacking challenge in the UK.

From Morvich the trail shares the route with the Scottish National Trail which runs from Kirk Yetholm in the Borders.

1. You walk for weeks

The hike’s start point, Fort William, the town below Ben Nevis, is famous enough. But the trail rapidly throws you into the great unknown, ushering you up along Scotland’s far-flung northwest coastline. Expect to see some of the country’s highest cliffs tumbling into a foaming ocean, with nothing but sea between the cape and the north pole. Eventually, after about 2 ½ weeks and almost no indications of civilisation whatsoever, you wind up on the north-westerly point of the British mainland, Cape Wrath. “Wrath” means turning point in old Norse – once the Vikings got around it, they could turn their boats for home.

The remoteness of this route requires some serious planning for. You’ll need more equipment than on most other hiking routes in Europe and, conversely, feel a greater need to cut back on weight. Essentials include a tent, sleeping bag and sleeping mat. Accommodation across the trail is too limited to rely upon nightly. Cooking gear is also a wise idea – otherwise, you’ll only get a hot meal every couple of days.

Compass skills are a must if you’re taking on Cape Wrath. Not only is the trail unmarked, but there are also no paths on many stretches. Yes, that means ploughing through bog, across moor, over mountains, often with precious few points of orientation save what your compass is telling you. The consequences of getting lost are way more significant on this trail than on any other in the UK: you’re frequently more than a day’s hike away from help and mobile reception is sparse.

4. The wilderness is legendary

The Cape Wrath Trail was designed to thrill – and makes a point of avoiding roads. Even so, such knowledge doesn’t prepare you for quite how hauntingly wild it gets. The route rambles over such remote regions as Knoydart – a hiking playground with the legendary refuelling stop of Inverie, on the UK’s only road not to be connected to any other road, and Assynt – boasting arguably the world’s loveliest and most unspoilt mountainscapes.

5. The midge will be the bane of your days

Red deer, golden eagles, seals, a myriad frog species, shaggy highland cows – all can be glimpsed on this wildlife-rich route. However, the creature certain to take centre stage of your day is the midge. This little biting insect is a real bugbear – feasting on your flesh from the moment you set down your pack. Tent pitching becomes a nightmare. Don’t forget to pack insect repellent and a midge net for your face, the place where it is most aggravating to have the wee things mustering.

6. You will be alone

Of the handful of settlements that the path bypasses only five could be called anything more than hamlets. There are entire days of nothingness between the nearest two dwellings. Mobile phone signals and recharging points are somewhere between sporadic and non-existent. Relish the remoteness; it is one of the seductive aspects of this trail. But respect it, too, and make provisions accordingly. Come prepared to survive in the wild overnight. Notify relevant parties as to your route. And bringing a GPS always helps…

The Cape Wrath Trail doesn’t exceed 750 metres of elevation at any point – but you’re not in for an easy ride. Climbing 250 metres when you’re pushing through waist-deep bogs is as difficult as climbing five times that height on terra firma. With the bogs and a number of wide and fast-flowing rivers, you WILL get wet feet.

Blistering from wet feet is one of the key reasons why so many hikers abandon the trail. Once reconciled to sodden shoes, the choice is yours: waterproof garters to keep out the worst of the wet, quick-dry hiking shoes, or just grinning and bearing it…

The Cape Wrath Trail is actually not one path but an entire system of them. Almost every stage has at least two, if not three, possibilities. More than almost any other hike, you really have the chance to make the Cape Wrath Trail your own. All the better for trading tales...

9. You will bag bothies

One of the most unique aspects of the Cape Wrath Trail is how it relies upon Scotland’s bothy network for overnight stops. Beyond the range of most day hikes but the only non-canvas digs around on much of this trail, bothies are mostly old crofts in out-of-the-way locales revamped to serve as basic wilderness shelters.

They come in a variety of shapes and forms: deer stalking huts in the forest, lonely farmsteads on the open moor or fisherman’s cottages on the seashore. More than the bed or the fireplace, what walkers often appreciate most in a bothy is the protection it affords from the midges. This rather singular form of accommodation is more plentiful on the route than in any other part of the country: between a fifth and a sixth of the UK’s bothies are here for the bagging.

10. It’s the destination for a new ultra run

As if hiking this route wasn’t challenge enough, as of May 2020 a bunch of the world’s most hard-core athletes are going to start running along it. The Cape Wrath Ultra, set to cement this corner of Britain on the extreme sports circuit, will debut as the UK’s first multi-stage ultra run. It’s being rated by some as at least as tough as the Sahara-based Marathon des Sables (which is usually regarded as the world’s toughest foot race) – it’s almost 100 miles longer, for starters…