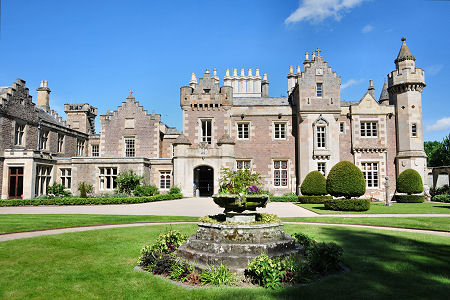 Abbotsford - around 3 miles west of on the banks of the Tweed is Sir Walter Scott's romantic mansion of Abbotsford. The perfect day-out when staying in our contemporary barn nearby Melrose. Abbotsford House is weird and elaborate and magnificent, and you don’t need to be a Scott fan to marvel at it all.

‍
Abbotsford is the ancestral home of Sir Walter Scott, the 19th century novelist and poet of "Waverley", "Ivanhoe", and "Lady of the Lake".

Sir Walter Scott’s Abbotsford remains today as one of the most famous houses in the world; it reflects, almost as no other place, the mind, enthusiasms and preoccupations of the man who built it. Constructed on the ample proceeds of a literary career without parallel, it is an enduring monument to the tastes, talents and achievements of its begetter. The stones of Abbotsford speak eloquently both of triumph and disaster: First of literary and worldly success, then of the fortitude with which adversity was faced and ultimately conquered in Scott’s debt-ridden but noble final years.

Stunningly located on the banks of the River Tweed in the Scottish Borders, Abbotsford sits at the heart of the landscape that inspired the poetry and novels of its creator. Unlike the homes of other great writers, this is a house that the writer himself designed and as such, uniquely embodies a physical representation of the Romantic Movement that he helped to create. When you touch the bricks and mortar of Abbotsford, you are touching the soul of Scott.

Ochiltree’s Dining (named after Edie Ochiltree, a character from The Antiquary by Scott) is situated on the first floor of the Visitors Centre with stunning views over the Walled Garden and the historic house. Ochiltree’s is open daily and is fully licensed. Our team of chefs source the best local produce to create a fresh, seasonal menu. Serving hot and cold beverages, cakes, light bites and snacks a lunch menu and afternoon tea. Alfresco dining is offered in the summer months on our terrace balcony.

The garden at Abbotsford is distinct in character; taken together, the layout forms three outdoor ‘rooms’ designed to offer picturesque settings for the main house. The gardens we see today are still fundamentally Scott’s work, though with certain alterations carried out by his descendants to adapt the space for the changing needs of the family.

The garden is compact, fragrant, colourful and detailed. It is contained within high walls, with the facades of the house setting a scene which could be straight out of one of Scott’s historical romances. You can look up to Scott’s ‘Juliette’ balcony sited at his bedroom window, see across to a ‘Rapunzel’ tower which overlooks the river, and explore the gothic staircase leading to the meadow beyond. Find Scott’s greenhouse based on a medieval jousting tent, and spot the heritage vegetables and fruit growing in the kitchen garden. Sit back and enjoy the heady scents of the herbaceous borders, or take a stroll to the river.

Designed to complement the woodlands surrounding the historic house, the Family Play Trail follows a winding route through the trees, past a medieval woodcutter’s village complete with playhouse on stilts, a cradle swing and balancing activities. The path leads to the focal point of the Play Trail – a wooden fortress with a seven-metre pyramid tower accessed via a mini suspension bridge. Children will be able to pull themselves up to storm the fortress ramparts and then escape via a seven-metre tunnel slide.

“Romance in stone and mortar” is how Sir Walter Scott described Abbotsford. From a small intimate ceremony in the historic house to the most lavish of receptions in a marquee overlooking theTweed, Abbotsford is a romantic, unique and exceptional venue for that special day. Our wedding co-ordinator is available all year to work with the bride and groom from the initial enquiry through to the big day itself.

Visit the exhibition on the life and legacy of Sir Walter Scott and follow the story of Scotland’s greatest man-of-letters for yourself.

There is something for tourists and locals alike, at Abbotsford’s Gift Shop. Choose from a range of souvenirs designed exclusively for Abbotsford and inspired by the artwork and treasures on display in Abbotsford House. Browse our selection of antique and new Scott and Scottish books that will remind you of your visit. At Abbotsford we strive to source the best of British, in particular Scottish quality products that regularly change with the seasons