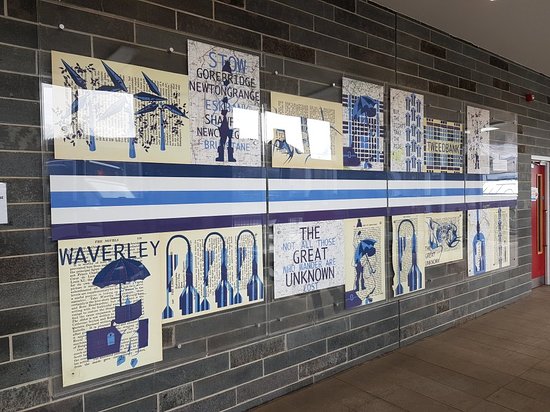 The Waverley Route was the North British Railway’s line between Edinburgh & Carlisle, through the Scottish Borders. Opened in two stages, between 1849 & 1862, the railway linked the Border towns of Galashiels, Melrose, St.Boswells & Hawick. It also saw one of the first preservation attempts in the country, which it was hoped would save it from closure, being run as a private venture. It held a legendary status with many supporters and enthusiasts, before closure in January 1969, seeing steam locomotives used right up until November 1967.

Borders Railway: back to the beginning

As people in the Scottish Borders prepare for the opening of the Borders Railway, we've taken a look at the history of the old Waverley Line, which closed in 1969.

The Waverley line was built by the North British Railway Company and was completed in 1862.

It was 98 miles long and quickly got a reputation as the toughest main line in Britain because of its twisting curves and steep gradients.

But it was beautiful too, and was christened the Waverley Route, after Sir Walter Scott's historic novel.

It was also the life-blood of the Borders, reaching out to almost every major town and settlement through its branch lines.

The beautiful, but remote, surroundings proved to be the line's downfall. It was always an expensive route to maintain and even it's Victorian creators began to see it as a financial burden.

But was it always doomed to failure?

The very last passenger train to run on the Waverley line was on Sunday 5 January 1969.

What to see when visiting Galashiels

The Waverley Line Artwork is located in the heart of Galashiels. Hand screen printed artwork by Jane Fleming, commissioned by Scottish Ministers to mark the 200th anniversary of Sir Walter Scott's 'Waverley' novels and the return of the Waverley Line. Individual posters for each station also hand screen printed by Jane can be viewed at each stop down the line.
Definitely worth to visit!